‘There’s more to it than meets the eye’. How many times have you heard this phrase? If you’re familiar with the concept of thermal imaging then you’re aware there’s only so much the naked eye can see.

Visibility is impaired in certain situations for instance at night. But that doesn’t mean there’s nothing happening in the invisible spectrum. Thanks to thermal imaging cameras certain important but hidden aspects are brought to “light”. And then add that to a drone. The drone thermal camera innovations can transform thermal imaging applications.

Below we review some of the best ones. But how exactly does the technology work?

What is a Drone Thermal Imaging Camera?

You’ve heard of a thermal imaging camera but what exactly happens when you combine that with a drone? Here’s a definition that might assist:

How Does it Work? 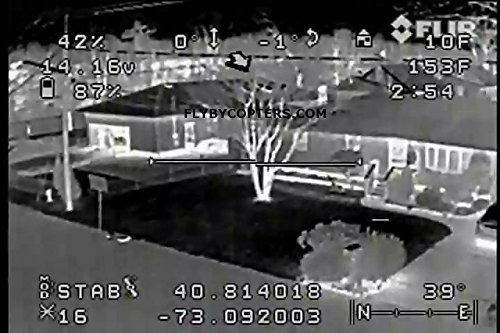 Did you know: All objects absorb, reflect and transmit energy at different levels. While the ordinary human eye can’t pick up this energy, specialized infrared equipment can detect this energy and display it as an image.

Thermal imaging cameras see through darkness and ignore visual camouflage. Also they need no light whatsoever to produce a clear image. So how then do they produce it? They rely on emitted heat instead of light to create an image.

This is done by recording minute differences in the heat emission temperatures and translating that information into a visible image. Because they rely on thermal instead of visible contrast it means they’ll provide perfect vision even when darkness renders normal eyesight useless.

Drone thermal imaging cameras are particularly useful in these instances.

By focusing this camera on the roof of a building, technicians can see where thermal insulation is faulty. Apart from detecting overheating circuits and heat leaks they can also determine how effectively a roof is insulated.

Thermal imaging camera sensors help farm owners manage crops, soil, fertilizing and irrigation effectively. How? The cameras use infrared wavebands to capture both visible & invisible images of crops and vegetation. Identifying the health of soil & crops with the naked eye is very limited. Drone cameras allow farmers to see further than the naked eye and gather more data by:

Even citizens benefit from use of these cameras where safety is concerned. How? Law enforcement uses them to:

As mentioned earlier this concept allows for improved visibility in dark or visibly impaired environments. As a result fire fighters use them to see through smoke and consequently find people in need of rescuing. Also it helps them localize hot spots of fires so they know where they need to be. 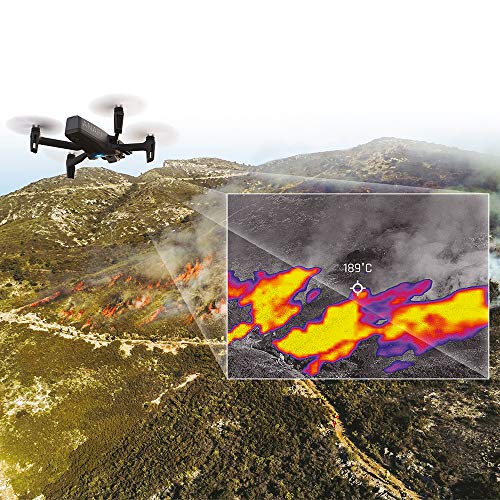 Ask any serious hunter and they’ll tell you many animals are mostly active at night - using darkness to remain undetected. Unfortunately they can’t hide from the drone thermal imaging camera. Why? All warm blooded animals will show up clearly in the thermal image, regardless of intensity of darkness or weather conditions. 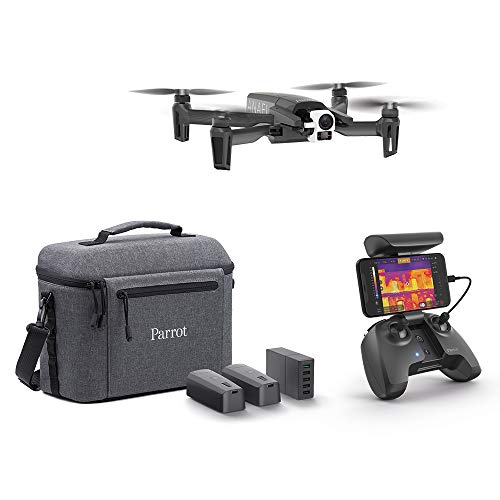 The combination of a drone, a visual camera, and a thermal camera is the height of technological indulgence. The Parrot Anafi Thermal drone brings the best of both worlds into one device and gives you control & efficiency. There’s no limit to where you can operate these drones. It can conveniently fly over areas you previously couldn’t see with the naked eye and detect any thermal presence using its infrared lens.

The ability to shoot visual photos as well as thermal images is what makes this device particularly powerful. It’s fitted with two cameras that produce high accuracy shots from the air. A 4k visual camera and a FLIR thermal camera. The thermal camera sees beyond the visible and picks up on any temperature differences.

The visual camera gives you a real-life image that allows you to see a shot as is. The combination of the two makes it easy when you need to do an in-depth analysis of an area. You have the benefit of two different views captured at the same time.

The flexibility and mobility that a thermal drone affords is unequaled. This is sophistication and intelligence packaged in one useful device & used across several industries.

There's an extended range to view objects at a fair distance. The 21MP Sony visual cam allows for great detail in your visual photos and the ability to zoom in.

You have 26 minutes of uninterrupted flight time. This allows you ample time to identify problematic areas and you can also switch from RGB view to thermal view. You also have the option to combine the two for deeper analysis of a scene.

The design is ultra-compact and lightweight. It weighs only 315 grams & can be easily folded away to carry with you anywhere. If a drone is too heavy it affects its gravity so the lighter the drone the better.

It allows you to zoom three times on both the visual and thermal images. The three-axis hybrid stabilization assists you in getting a stable shot every time. It has a 180° tilt gimbal that gives you clear shots from different angles.

The device requires three lithium polymer batteries which are included when you purchase it. The Anafi Thermal drone includes 3 batteries which allow for 26 minutes of flight time per battery.

It comes with a 16GB memory card that can be edited. That’s sufficient space to save multiple images to review it later.

There’s a limited one-year warranty on poor workmanship and any manufacturer defects. Parrot also included a six-month warranty against any parts that are worn out during this period. 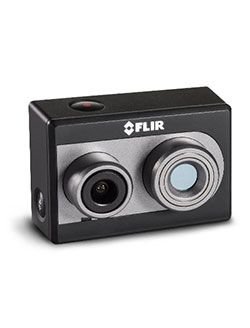 Here we have a compact action camera which integrates dual sensor thermal and visible light color imaging designed for drones.

This lightweight model lets you view thermal or visible images alone. It features the intuitive FLIR app and built in Bluetooth which makes setup a breeze. Apart from recording digital thermal and 1080p color videos you can also capture still pictures for analysis later. They’re simply saved to an on board microSD card.

You can combine two images together using the MXS blending feature for even more image detail. It accepts 5-24v DC input power and outputs - as well as both Analog and HDMI digital video. 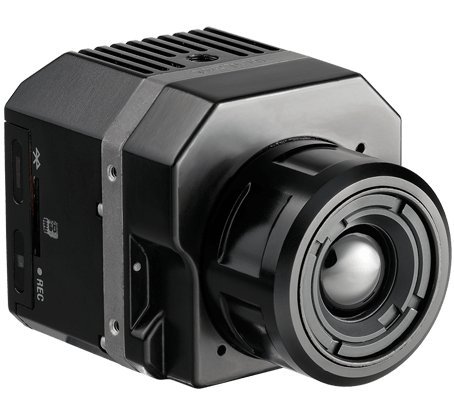 By picking this camera you don’t have to pay for features you don’t need, if you’re just interested in basic functions. The FLIR Vue Pro 640 comes with all the necessary features for effective thermal imaging. Also, it includes in flight control of two camera functions through direct PWM connections.

You can take both still images and videos using this drone thermal camera. Plus apart from being a thermal camera it’s a thermal measurement instrument and data recorder. Its MAVlink compatibility will allow easy image stitching required for mapping, surveying and precision agriculture applications.

It features a mobile app that allows pre-flight camera set up and makes configuration quick & easy. This way you don’t have to drag a computer out to the flying site. Also because it has a microSD card you won’t lose any of your valuable data due to transmission loss. 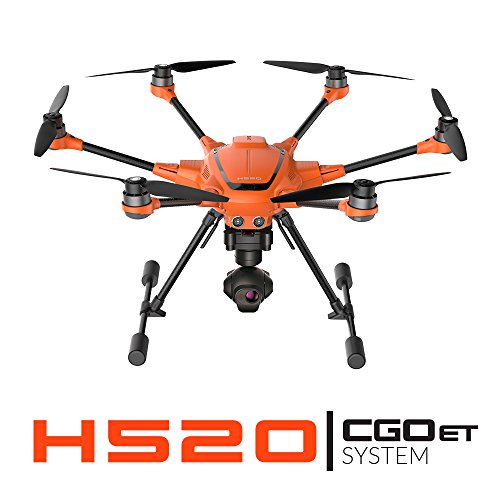 This camera is specifically developed for commercial use for insurance inspection and construction. It’s the perfect solution for long flight times.

Unlike other models this camera has an adjustable temperature detection scale so you can focus on relevant areas. Also the multiple palettes allow for an accurate visualization of heat sources. It also has a Gimbal mount for smooth image/video gathering.

The large infrared sensor detects greater detail in the dark than the human eye and is ideal for site monitoring. It has simultaneous HD and infrared recording to separate your files. Also it has thermal & available light recorded simultaneously for frame accurate synchronized playback. 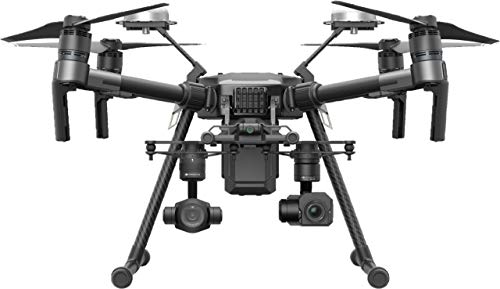 This camera combines everything you need for an effective drone thermal imaging experience. From flight stability, Gimbal technology to mobile app integration, expect only the best images and video.

The kit allows you to deploy two imagers below the aircraft so you can fly both thermal and visible cameras at the same time. It features an M2 10 RTK airframe and a 19mm radiometric thermal camera with a resolution of 640 x 512.

The built in RTK unit enables the drone to hover with centimeter accuracy. They also feature an upgraded Cendence control unit and a single upward facing Gimbal for aided stability.

That’s a load of features that will make your workflow easier from now on. 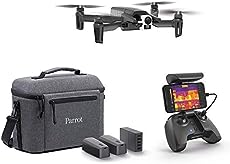 Ideally the most effective camera must have both high resolution thermal and high definition color imaging integrated into one if you need clear images for your work.

This is the extent to which your camera can see and it’s measured in angles. Angles between 140 to 170 degrees are quite impressive.

The last thing you need is a shaky video. Make sure you pick a camera with stabilisation if most of your footage will be recorded in video mode as opposed to still pictures.

The quality determines how clear and smooth the video is. Pick a camera which uses real/native resolution and a frame rate of at least 30fps for clear videos.

Because your drone will be venturing into all sorts of weather conditions, in dire circumstances it might end up on the floor or worse - shredded into pieces. You don’t want to lose your footage if this happens. To avoid this, a weather & shock proof camera is ideal.

If it’s too heavy it’ll affect the drone’s center of gravity and it won’t fly properly. Simply put: the lighter, the better.

How you mount your drone will depend on whether it’s compatible with the camera or not.

For this one simply pop it in the frame or attach it on the mount.

To mount your camera to your drone you can either buy a Gimbal or DIY kit.

The support the thermal drone affords to industries such as agriculture, construction, public safety, and real estate is revolutionary. It has completely transformed how professionals in these industries plan and execute their tasks.

The usefulness of a thermal drone like the Parrot Anafi Thermal can't be ignored any longer if you want to succeed in your profession. Of course, it's not only used in a formal setting but offers enjoyment to the avid hunter, dedicated photographer, and tech enthusiasts.

It’s an investment worth considering. Let us know what your experience has been using a thermal drone and if you have any other recommendations for our readers.