Flir One Pro Review – Professional Thermal Imager for Your Smartphone

If you are a smart home enthusiast, you will agree that a thermal imaging camera is as essential as a flashlight or tape measure. In fact, an infrared camera is more valuable since it can help you save a lot of money that you would otherwise spend on repairs.

The company boasts of being the world’s sixth sense with its innovative technologies in the making of thermal imaging infrared cameras. One of their most popular and most affordable thermal camera attachments is the FLIR One Pro. It is an update of the FLIR One with improvements such as the VividIR image processing technology that enables you to see components with full details even from a far distance.

Why Buy the FLIR One Pro?

The FLIR One Pro is designed to help you find invisible problems around the home fast. It’s one of the most powerful compact thermal cameras on the market suitable for residential, commercial and industrial use.

FLIR’s One Pro has optimal high resolution and it can detect temperature differences immediately. So if you’re looking for a versatile thermal smartphone attachment with many powerful metering and adjustment options then the FLIR One Pro is the perfect device for you.

The FLIR One Pro is designed to be plugged into your SmartPhone. The overall design is slightly smaller than the professional Therm-App camera attachments.

FLIR One Pro may have the same width has your SmartPhone but the camera part is thicker.

FLIR’s One Pro connector is located in the middle of the device so that the edges don’t protrude when you connect it to your SmartPhone. The output can be extended by an extra 0.3" by using the wheel adjustment located below the One Pro. This allows you to connect the FLIR One Pro to almost any supported iPhone or Andriod SmartPhone even if you are using a thick case.

On the side of it there’s a power button and a USB C input so you can charge the device. It has an independent internal battery so it won’t drain your SmartPhone’s battery life while you’re using the camera.

The FLIR One Pro has two cameras: a thermal core and a visual camera. The thermal imaging camera is what detects temperature differences while the visual camera allows you to snap pictures and videos.

FLIR’s One Pro comes in a black with a robust construction that protects the internal parts from damage. The durable construction ensures that your One Pro camera doesn’t shatter on impact so you’re prepared in case the device is accidentally dropped.

Since this attachment for smartphone is light and compact you can store it in your pocket or in a small pouch when you’re traveling.

The thermal imaging camera offers a 160x120 resolution sensor that’s designed to measure temperatures through infrared emission. FLIR’s One Pro standard visual camera has a resolution of 1440x1080. The paired cameras allow you to take pictures and videos in higher resolutions through the MSX feature which overlays the thermal image on the visual image allowing you to see more details.

FLIR’s One Pro has a 19,200-pixel resolution which is four times as powerful as the Gen 3 VividIR and Pro LT cameras. The FLIR One Pro allows you to see more detail in the objects you’re looking at. To give you an indication of image quality, you can detect the body temperature of a person standing 30m away from you with the FLIR One Pro with the utmost clarity.

The FLIR One Pro is rugged and durable enough even for harsh environments. It can survive a drop of about 5.9 inches plus it comes with a tough build quality and a protective case.

In order for the FLIR One Pro to operate you’ll need to install the compatible app for your SmartPhone. The app is compatible with any Android or iOS SmartPhone. Once you have the app installed you can plug your device into your phone and start inspecting areas with your thermal camera.

FLIR’s One Pro app has a main interface where you can select which filters to use and you can browse through all the options it gives you. Use the MSX (Multi-Spectral Dynamic Imaging) to snap higher resolution images and videos.

The function of the MSX feature is to refine the contours of objects the visual camera detects. These contours will then be shown as transparent lines over the thermal image so you can clearly identify what you’re seeing through the camera. 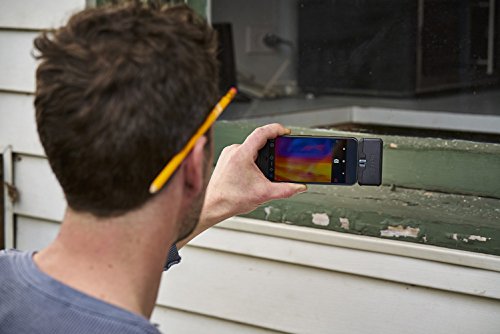 There are many ways to put the FLIR One Pro to good use. First of all, in terms of performance, this smartphone attachment produces an image sharp enough to point out heat signatures.

A camera is an essential tool for home owners and who love to handle the mechanical side of any task at home.

However, if you are going to rely on its batteries, you will have to compromise a bit as the batteries only last about 45 minutes unlike the 1 hour as claimed by FLIR.  Furthermore, the battery takes time to get to full charge which can be an inconvenience for off-grid applications.

Furthermore, the app is not compatible with Google Pixel 2 XL, the Nokia 8, Samsung S9 and S8, the Sony XZ, Xiaomi Mi and the OnePlus 5T.

There are three versions of the FLIR One Pro designed for different inputs. The FLIR One Pro comes with either a USB-C, micro USB or lightning connector.

Other subtle differences include thermal pixel size because the Pro One has a 12µm thermal core that produces more compressed pixels which result in sharper image quality. The Pro LT has 17µm which produces a lesser quality image.

Even though there are differences there are also some similarities between the FLIR One Pro and LT devices. These cameras both offer an MXS feature and they have the exact same frame rate of 8.7Hz. The One Pro and Pro LT have the same emissivity adjustments and a drop test of 1.8m.

Overall they have the same rugged design and outputs as well as connectivity features. Both devices can be connected via Wi-Fi. They also have the same thermal accuracy of ±3°C or ±5% which gives you precise temperature variations of objects.

FLIR One Pro vs. FLIR One Gen 3

Unlike the FLIR One Pro LT, the GEN 3 is very close to the One Pro thermal camera with only slight differences in design and specs. The FLIR One Pro Gen 3 is more elegant with its lighter color construction but the USB output and power button are located in the same position as the One Pro.

Let’s go through the difference between the two FLIR thermal cameras first. The IR sensor on the One Pro is 80x80 but the Gen 3 has a slightly higher IR sensor of 160x120. The field of view on the One Pros is slightly smaller with 50°x38.6° whereas the Pro Gen 3 has a wider FOV of 55°x43°.

The FLIR Gen 3 offers the VividIR Super Resolution feature but the One Pro camera doesn’t. There are also slight differences in the thermal camera sensors because the One Pro offers 12µm and the Gen Pro 3 has 17µm.

The FLIR One Pro thermal image camera is designed for homeowners, construction workers, and plumbers. It’s a great thermal imaging camera for those who are looking for a powerful compact device to detect gas and water leaks throughout a building.

Another advantage of the FLIR One Pro is its rugged and robust construction. It has a drop rate of 1.8m so if the device accidentally falls out of your hand, it won’t break on impact.

The FLIR E6 and E8 are bigger devices with smaller screens than your SmartPhone but they have improved infrared technology & more options to pick from.

We hope our Flir One Pro review helped you with your buying decision. The FLIR brand offers various designs and specs for any type of professional. But if you’re looking for a powerful thermal camera on a budget then the FLIR One Pro device could be what you’re looking for.