Since its founding in 1978, Flir has grown to become the largest thermal imaging company in the world with a variety of high-end cameras, components, and image sensors. The company’s ThermoSight Pro series include the new PTS233, PTS533, and PTS736 thermal scopes. Although the three thermal scopes look very similar, particularly in design, the lens system vary from one to the other.

The PTS533 and PTS736 are better suited for longer range hunting as they have larger lenses along with higher prices All the models feature a lighting fast 60 Hz refresh rate providing crisp images even when tracking fast moving targets.

Then there is the new Flir Thermosight PRO PTS233, which is a rugged, compact thermal scope with the same 12-micron Boson thermal core as the other two models. The PTS233 has a 19mm, f/1.0 germanium lens and an optical magnification of 1.5X. With an up to 4x digital zoom. The thermal resolution of the FLIR PTS233 weapon sight is 320x240 (same as the others).

With a weight of only 1.44 pounds, the Flir Thermosight PRO PTS233 is one of the best lightweight thermal scopes in the FLIR PTS family, with an operating temperature range between -4 and 122 degrees Fahrenheit.

FLIR has integrated an in-view menu and an effective control pad to make the unit easy to use, thus improving the overall user experience. The five built-in high visibility reticle patterns not only help with accurate target acquisition but also give you red, cyan, white, and black color choices.

The manual power switch at the back of the unit makes the FLIR PST233 easy to turn on or off or put on standby on the move as well as in the dark. The controls are also randomly placed,  so it might take awhile to figure out which button is appropriate for changing a palette, zooming the lens, or capturing a photo, just to mention but a few. However, once you get used to the typical controls configuration, navigating the buttons should be easier.

The imaging sensor of the scope produces good quality videos at a standard refresh rate of 60Hz per second. The sensor is also said to be very sensitive in the Long Wave Infrared region of the electromagnetic spectrum.

Although the Flir Thermosight PRO PTS233 thermal scope has a video connector, it does not have Wi-Fi so you cannot stream your videos live or transfer them wirelessly. You will need to connect it to your computer to view images and videos.

This thermal scope can capture both images and videos. FLIR made sure that the video recording is recoil activated, this means that you will never miss the action. And as far as the storage of the unit goes, the built-in memory can store up to 2.5 hours of motion pictures or 1,000 images.

The FLIR PTS233 weapokn sight unit uses two CR123A 3 volts lithium batteries, a good pair that holds up quite well even in cold weather. If you do not want to use the default battery that comes with this thermal scope, or you just need an additional source of power, then you can take advantage of an additional external battery pack.

Another option would be to use 3.7v batteries. You can also use a UDB power bank, but you’ll need to make sure the minimum output is 5V. If you have a 10,000mah USB power bank, for example, it should provide enough power for night hunting. 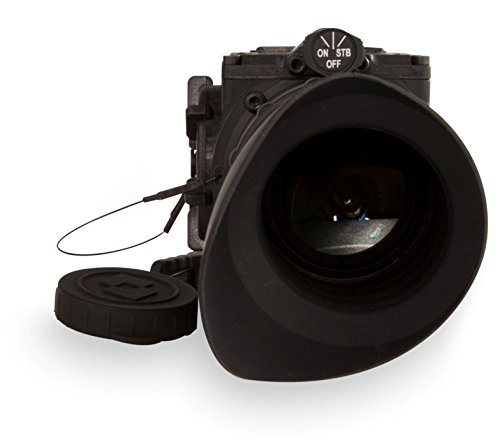 The 1280x960, Quad-VGA FLCOS is a bright high resolution visual display that helps ensure you don't miss any details when scanning for targets.

FLCOS stands for Ferroelectric Liquid Crystal on Silicon. While a lot of words this type of display has a very high switching speed which means that color changes and transitions happen much quicker with less loss of image clarity unlike other standard VGA or liquid crystal displays. They are also very small which allows them to be used in applications such as thermal imaging scopes.

The FLIR PTS233 also has an included 45mm eye relief which can be replaced if needed.

Can the Flir Thermosight PRO PTS233 be used as a clip on scope?

This thermal scope is not designed to double as a clip on scope.

What is the warranty of this model?

Is this device waterproof?

Besides working well in cold weather, the PTS233 is 100% waterproof, IPX7 rated. So, you can also use it even when it is raining.

Yes, Flir PTS233 can automatically NUC. You also have an option to add a manual NUC any time you like.