Want to get in touch with us?

If you have any questions or suggestions please do not hesitate to contact us.

Founded by Glyn Bindon in 1981 under the name Armson USA, Trijicon is one of the biggest companies that manufacture, market, and sell high-end thermal imaging scopes for firearms as well as monoculars. They are known for using military grade components which does increase the cost but delivers a superior product. Trijicon’s image quality has to be seen to be believed!

After changing its business name from Armson USA to Trijicon in 1985, the company started to build and distribute self-luminous optic and night sight components using light-gathering fiber optics, low energy radioactive tritium and batteries. The product lines of the company include the IR-Hunter, REAP-IR, IR- Patrol, and SNIPE-IR. We will be concentrating on the IR-Hunter in this review and in particular the MK3 35mm model, however we will touch briefly on the other product lines.

The IR-Hunter is Trijicon’s flagship thermal scope specially designed for hunting. The IR-Hunter is available in two model lines, the MK2 and MK3. Each of these has two options, the MK2 20MM and MK2 35mm. While the MK3 comes in 35mm and 60mm, with the 60mm being intended for long distance shooting and hunting and having a smaller field of view. Many consider the MK3 35mm to the be the best of both worlds offering the ability to hit near and medium range targets while still having a good field of view.

The below table shows typical shooting distances for each lens type, obviously depending on conditions, weather, and your target these distances will vary but can be a good starting place when deciding which one is best for you.

The MK2 & MK3 are shipped in a hard-durable case, feature an OLED display, 12 Micron thermal detector with 640x480 thermal resolution, and 1.5x to 4.5x optical zoom depending on the model. In addition to the software and USB interface cable, a lenspen, an instruction manual, a detachable eyepiece, and a quick reference guide, the IR-Hunter MK3 includes three CR123A batteries. We would recommend that you purchase a battery pack or rechargeable batteries as battery life is one of the weaknesses of the MK line.

The REAP-IR is Trijicon’s “mini thermal scope” that is versatile and can be used in a variety of situations including hunting but is not designed purely for hunting like the IR-Hunter. The REAP-IR is smaller and more compact than the Hunter line although having many of the same specs. This thermal scope weighs just 21 ounces. The different models in this line have the same internal components, as well as very similar specs and lenses as the IR-Hunter above.

The IR-Patrol is Trijicon’s multipurpose thermal monocular model line that is built to accommodate as many different situations as possible. This monocular (M300W & M250XR) and can be handheld, helmet mounted, or rifle mounted making it very versatile. The IR-Patrol features a BAE sensor (as do all Trijicon products) to feed remarkably clear images to the 640x 480 screen, without magnification. IR-Patrol is intended to be used as a thermal monocular/spotter primarily although it can be adapted to other uses. The lens options are more limited with the IR-Patrol which limits its ability to function well when used on a rifle for anything outside of 100 yards.

The SNIPE-IR is Trijicon’s thermal clip-on scope. The SNIPE can be mounted in front of your day optic allowing you to use one rifle to hunt during the day and night without having to go through the hassle of re-zeroing your scope in. While the SNIPE is not specifically designed for hunting like the MK3 is can function well depending upon what day optic you are using it with. The SNIPE also does not have any lens magnification as it is a clip-on. The SNIPE-IR was built and optimized to be used with a 4x32 ACOG but can be used with other day optics as well.

Now that we have looked briefly at the different products Trijicon manufactures, let’s take an in-depth look at the IR-Hunter MK3 which is the upgraded version of the already good Trijicon IR-Hunter MK2. The MK3 features many improvements that users suggested and Trijicon listened.

The MK3 is easy to use and with the added features over the MK2 make it even better for hunting. It is equipped with a stadiametric range finder, battery extender, download video cable, multiple reticle locations, and a dual lever mount, the MK2 had a single lever mount. One of the most notable enhancements is the windage and elevation position readouts.

The MK3 features a 60Hz refresh rate allowing you to track quick moving targets with no image tearing or blurring. The MK3 also has the option to save battery life by lowing the refresh rate to 30Hz.

While the MK3 cannot record video as other thermal scopes can nor does it have WiFi it can send video to a digital recorder with the included video cable.  The BAE 640x480 micro IR vanadium oxide microbolometer with a pixel pitch of 12um and a spectral range of between 8 and 12um, lets you see both cold and warm objects even in no light situations. If you are into nighttime hunting, this thermal scope will help you locate your targets easily.

The MK3 features a diopter as well so that you can easily focus the image depending upon the eye relief and if you are wearing glasses.

The housing of the Trijicon IR Hunter MK3 is made of aluminum alloy with a great-looking black finish. Because the MK3 is weatherproof, you can use it even in the harshest weather condition and still get the best imaging results. Further, Trijicon included a double-lever quick release system on this model for easy and stable attachment to Picatinny rails.

Unfortunately, this thermal scope is not waterproof. It is water-resistant, but only up to a certain degree. You can submerge it up to 3 inches of water, but not for more than 15 minutes. This though is adequate for almost all hunters.

What you will love about the Edge Detection Mode is that it makes it easy for you to view your target object in a completely different way. Edge detection limits the brightness of the screen except for the outline around your target.

The 640x480 OLED display is crystal clear and Trijicon even included unique imaging features that you can use to boost the quality of the visibility; the best examples are the Enhanced Target Recognition and Digital Contrast Enhancement.

The Enhance Target Recognition (ETR) helps to auto-adjust the image of the target, ensuring that is does not get washed out combining this with the stadiametric range finder, which is easy to set up, helps you to know the distance between you and your target with ease.

What’s the Difference Between MK2 and MK3?

If you compare the IR Hunter MK3 with the MK2, you will note a number of differences between the two devices.

The MK2 has a single lever mount and has the option of a smaller 20mm lens. The IR-Hunter MK2 has a wider field of view on the 20mm lens model, so depending on what your preference is you may prefer the MK2 with the 20mm lens and wider FOV although keep in mind that your detection distance will be less.

Unlike the MK2, the MK3 features a dual lever mount, it has higher magnification (4.5x) but a smaller field of view on the 60mm model. For medium and long range hunting the MK3 is the best choice.

The MK3 IR-Hunter has two lens options. A 35mm lens like the MK2 and a 60mm lens. The 35mm lens, which is an exceptional all-around lens, is good for both spotting and shooting. With this lens, you can spot and shoot short, medium, and medium/long distance targets easily. The 60mm model is designed for long distance shooting and has a smaller FOV. The MK3 60mm is a perfect choice to use for hunting if you will be shooting long distances on a regular basis.

Lastly, the battery life of both models also differs. While the MK2 gives you approximately four hours of runtime, the MK3 IR Hunter can work for up to 6 hours on the 30Hz setting.

MK3 Versus The Pulsar XP50 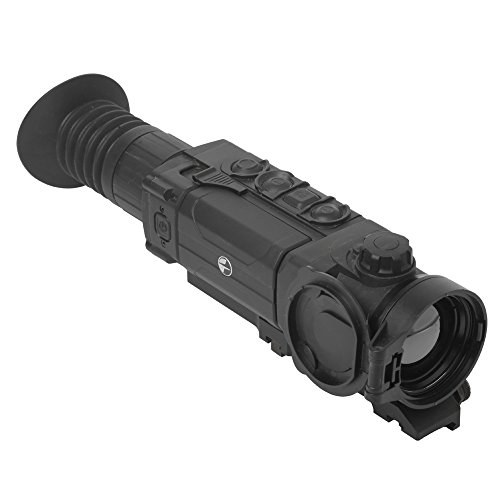 Pulsar makes some great thermal optics as well and the Pulsar Trail XP50 is often referenced as a direct competitor to Trijicon’s MK3 with people on both sides of the debate. The XP50 is much more feature rich with WiFi, video recording and streaming abilities as well as being somewhat cheaper than the MK3. The refresh rate is only 50Hz on the Pulsar XP50 and the image quality while great is not at good as the MK3. At the end of the day if you are looking for a thermal scope with the latest recording, streaming and technical features then the XP50 may be a better buy for you.

If you are looking for image quality, a thermal scope designed from the ground up for hunting and not concerted with recording or streaming your hunting footage the MK3 is the best choice.

Trijicon makes some of the highest quality thermal scopes and imagers available today with military grade parts. While they are some of the more expensive thermal scopes on the market their quality and durability speak for themselves. If you are a serious hunter and want the best that money can buy the MK3 is your best choice. Unless you know that you will routinely be shooting long distances the 35mm version is the best all-around choice.